Breaking Ground for the South Campus

A couple of weeks ago the Lord brought me to this passage in Ezra and I thought, “This is where we are!”

And they sang responsively, praising and
giving thanks to the Lord,
“For he is good, for his steadfast love endures forever
toward Israel.” And all the people shouted with a great shout when they praised the Lord, because
the foundation of the house of the Lord was laid.
—Ezra 3:11–12

More than 100 people gathered on the breezy, 90-degree afternoon and waved to the drone as it flew over the building site.

We began the service by singing “Great Is Thy Faithfulness” and thanking God in prayer for the good gift of this land.

Pastor David Livingston shared a brief history of God’s hand at work since the South Campus began in September 2006.

Elder Chair Kurt Elting-Ballard reminded us that “God did this” and shared how he had reflected on Pastor John’s sermon “The Antioch Moment” and all that God has done since Pastor John preached this message April 9, 2011. “The ground on which you are standing has been supplied by Him! God did this!”

Pastor Jason Meyer reminded us from Psalm 127 that “Unless the Lord builds the house, those who build it labor in vain.” Adding that “The Lord is building this house, this earthly temple as a means to build his Church.” 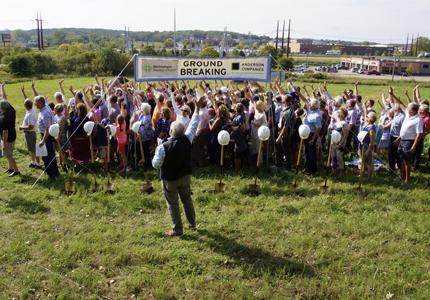 Waving to the drone

From Building Committee Chair Jon Hendricks:
I’m so very thankful that the Lord has brought us to this point. For a long time it felt as if we were like the Israelites wandering in the desert—no home and not knowing where we were headed. But now we’ve arrived at a new home, and it was God’s doing (as Kurt so emphatically pointed out).

From Pastor Jason:
[After officially shoveling the dirt on the land of our future church home] ... Our groundbreakers are “throwing it like they mean it” ... and they DO! Praise God!

From South Campus Lead Pastor Chuck Steddom:
It was so heartwarming when I asked how many of the people gathered last Sunday afternoon on our land had been at the South Campus since the beginning. Well over half of the hands went up. Praise God! So many people have faithfully worshipped and served at our campus for these last 11 years. How sweet it was to see God’s hand leading us since the beginning in 2006. Echoing from Jason’s quote of Psalm 127: “By his Grace, the Lord is building this people and this 24/7 worship and ministry facility. To God be the Glory!”

See the photo album ... with thanks to photographers Laur Weisensel, Ethan Bruneau, and Pastor Jon Grano.